North Dakota is now the second largest oil producing state in the United States thanks to the use horizontal drilling and hydraulic fracturing in the shale Bakken formation.

Foreign oil producers, like Saudi Arabia, have felt the impact created by the surge in U.S. oil output.

U.S. oil production is up 70% since 2008, which equates to about 3.5 million barrels per day.  According to the U.S. Energy Information Administration, North Dakota and Texas now account for nearly half of U.S. crude oil production.

Production in the Bakken accounts for a significant amount of that increased production: 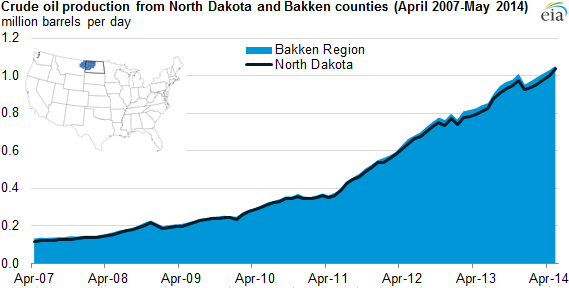 Hess Corporation recently completed an expansion project at it’s Tioga, ND gas plant with output predicted to increase by up to 300% according to the Oil and Gas Journal.

Hess is one of the leading operators in North Dakota with significant operations in the Tioga area.

Housing Is Tough to Find

This increase production has led to a booming economy in Western North Dakota.  Hotels are full and restaurants are packed with roughnecks and people who have moved into the region due to jobs created as a result of the boom.

People are pouring into the area to find high-paying jobs, but housing hasn’t kept up with demand.

Employers in the region are struggling to find employees and many won’t make a hiring decision until a candidate has found housing due to concerns that candidates may have to leave the area if they can’t find suitable housing.

Tioga RV & Trailer Park has been working with a number of local employers to help solve their employee housing challenges.

Call Us Today – Availability Is Limited

At Tioga RV and Trailer park, we have RV spaces and mobile homes for rent as well as corporate housing solutions.

Call Us Today to Reserve Your Space or to Check Availability

We have RV spaces and mobile homes for rent, but as one of the newest RV parks in the Tioga/Williston area with fiber-optic Internet, our spaces are in demand.

Ask us about availability and reserve your space or home while it's still available.